Yesterday I decided to have grilled chicken for dinner and as you know, that is only the beginning of meal planning. What was I going to serve with it and what did I have on hand? These things go easier if you have a pretty well-stocked pantry. You know, salsa, lime juice, rice, beans, etc. It also helps to have things like sour cream and fresh produce on hand too.

Since this is the middle of July, we are over-run with tomatoes right now. Knowing this, and trying to find different ways to use them up, I wanted to make some Pico de Gallo salsa. That’s in the realm of Mexican or at least Tex-Mex so when it came to whether to marinate the chicken or not I chose to marinate. Actually, I almost always marinate chicken. There are two reasons for that. One, chicken needs flavor! It takes on the essence of the flavor of whatever it’s cooked or paired with. The second reason is that chicken dries out so easily during cooking.

Yesterday I used the zest and juice of a large lime, added chopped cilantro, salt and pepper, and a bit of olive oil to a bowl and whisked it all together. I added it to the trimmed chicken breast that I had placed in a large zip-type bag and massaged it all together, letting it sit on the counter for about an hour to come to room temp while I made the pico salsa*.

Anyway, that was dinner last night. I made some guacamole and some Mexican rice and served the pico de gallo over the grilled chicken. It was great!

And, again I made too much – we had lots of leftovers.

Leftovers are great, as long as they are repurposed, as far as I’m concerned. In my house, Paul is the one who usually eats the leftovers. Me? I want to make something new because I get bored with the “old”.

But back to the breakfast hash! (Sorry for the rabbit trail)

This morning was no different. I decided to repurpose last night’s dinner into a one-dish breakfast.

I had leftover, pico salsa, guac, grilled chicken, and Mexican rice. I had a pretty good start with the ingredients already.

I looked in the pantry for some type of beans because let’s face it, Tex-Mex needs beans! I found a can of chili beans that are already seasoned so I put them in my pre-heated large iron skillet, without draining.

Next, I added the leftover Mexican rice. After rummaging around in the fridge for some pepper jack cheese I discovered some leftover corn on the cob and thought – why not? I cut it off the cob and tossed it into the pan with the beans and rice.

Now for some protein! The chicken I cut into bite-sized pieces and tossed into the pan, too. To this, I added a bit of the leftover pico de gallo and some regular salsa, heated everything through, and then made 4 “wells” in the bean and rice mixture. Into each well, I cracked an egg and seasoned with salt and pepper. On the top, I added shredded pepper jack cheese, taking care not to cover the eggs.

I popped it all into a preheated 350-degree oven and left to bake for about 15 minutes. or until the eggs are opaque but not set. Then I turned the broiler on, keeping watch closely and browned it off a bit before removing from the oven. (Don’t forget that handle is sizzling hot – use a towel to remove and leave the towel in place so no one else touches it!!) 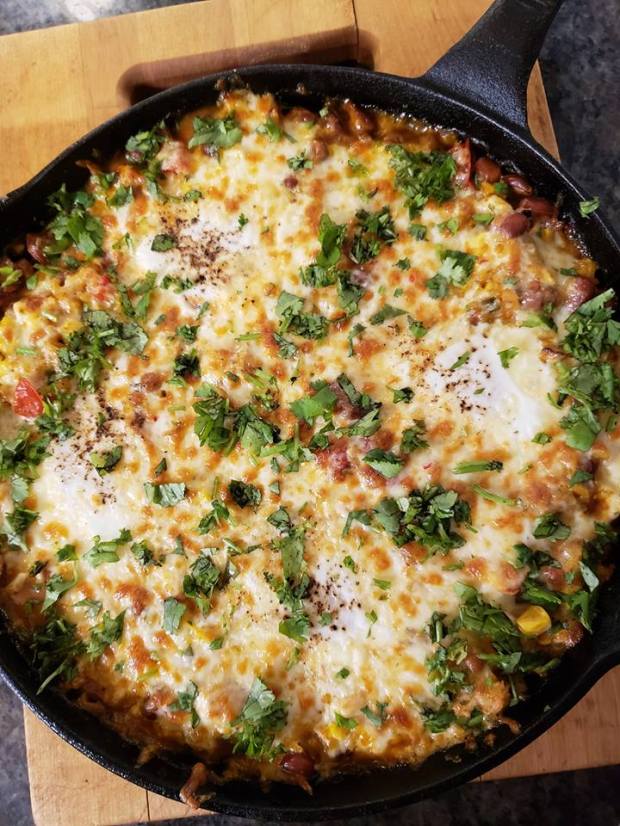 I brought the entire pan to the table to serve “family-style.” I had sour cream, guacamole, and the pico salsa on the side. I also heated some fresh corn tortillas on the stove while the hash was baking then served those alongside, too.

It was soooo good! I don’t know how I managed to clean my plate but I did! (Close enough to clean!)

Buy Now in My Etsy Store!

Making food to reignite the passion for conversation around the table